Absolutely appalling' - Christchurch partygoers slammed for 'ignorant' Hitler, Holocaust victim costumes
14 September 2021
By: Anna Leask
A photograph of Christchurch partygoers dressed as concentration camp victims surrounding Adolf Hitler and making Nazi gestures has gone viral and been labelled "absolutely appalling".
A woman whose family members were murdered in the Holocaust said their choice of costume showed ignorance and a cruel lack of empathy and education.
And she said it was especially sad given those in the photo live in a city that had recently experienced a massacre driven by hate and racism.
The photo was posted to social media site Instagram over the weekend and supplied to the Herald this morning.

Holocaust Centre of New Zealand chair Deborah Hart said the photo was "absolutely appalling". "I was absolutely appalled at the lack of empathy coupled with a seemingly complete ignorance of quite recent history," she told the Herald.
..."I would say to any one of these young people in that photo who chose to dress up as Holocaust victims and to the woman who dressed up as Hitler- reach out to us." 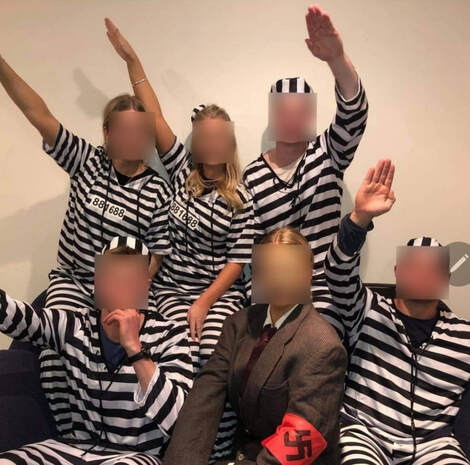 Boyd Klap honoured for maintaining the memory of Anne Frank
August 6, 2021 by David Zwartz
Over a decade of activities promoting the memory and messages of Anne Frank’s short life was recognized  with a special presentation to 94-year-old Dutch-born Boyd (Boudewijn) Klap. 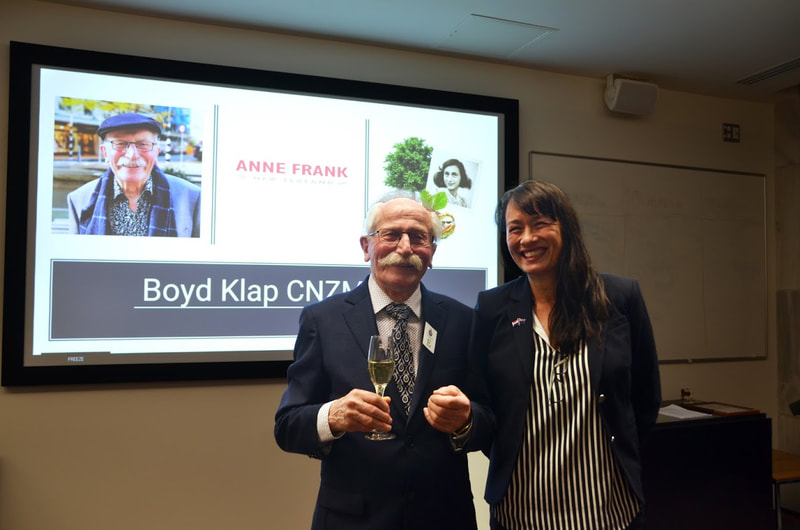 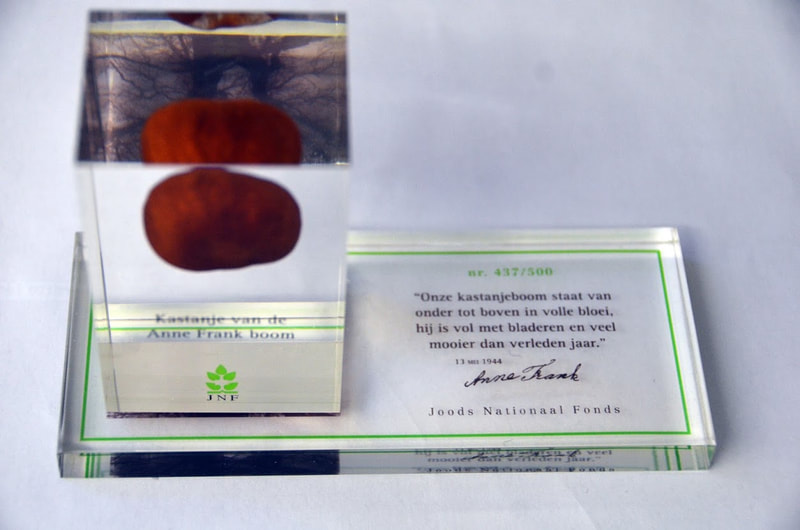 Chris is leaving his role to seek new experiences and follow his passion in education. We are grateful that he has agreed to continue his association with the Centre in a fixed term capacity, to ensure a smooth transition in some of the Centre’s key Holocaust education initiatives.

Chris joined HCNZ in August 2015 serving first on our Board, then as National Director of Education, before being appointed the Centre’s inaugural CEO in January 2019.

Chris has been a loyal and dedicated member of our team, giving huge energy to the Centre.

He has helped lead HCNZ through a period of exponential growth, and significant change. During his tenure the Centre has increased in size and visibility, and has developed into a national organisation. You will all be familiar with many of our flagship achievements, such as the Yad Vashem seminars, our coordination of national Holocaust remembrance efforts, and of course the creation of the Children’s Holocaust Memorial. Chris has played an integral role in all of these, and in too many other projects to list here.

This period of growth and change is ongoing, with innovative education initiatives, exciting plans for the creation of a new centre in Auckland, and the ever-renewed commitment to vigilance against Holocaust denial and antisemitism. HCNZ is in a strong position to carry out its mission, and we look forward to working with all our stakeholders – staff, members, volunteers, donors and institutional partners – in order to do so.

The HCNZ Board will soon begin the process to appoint a new CEO. In the meantime, the Board will work with staff and stakeholders to ensure that the transition creates as little disruption as possible. In the interim, the Board has shared the responsibilities of the CEO.  Any queries can be directed to Board Chair, Deb Hart: deb@debhart.co.nz.

Chris’s last day as CEO will be 21 August, but he has agreed to continue to work with us on key projects, notably education in the Auckland region, as Education Projects Director, until the end of the year.

We will farewell Chris at the Centre’s AGM on 12 September.
​
B’shalom,
Deborah Hart
Chair
Holocaust Centre of New Zealand

The creation of university design lecturer Matthijs Siljee consists of three chairs – two facing each other, the third facing away, excluded.

Wording on the chairs and plaque, in te reo Māori and English, explains how depicting prejudice and exclusion links to Anne Frank and the Holocaust. Siljee spoke of the frightening speed with which Anne Frank was overtaken by Nazi Germany’s genocide of the Jews: “Within 15 years she was born into democracy and died in barbarity.”

He also commented that, as the chairs are made of not only steel, but a tough recycled plastic, “You have all contributed by handing in your soft plastic bags.”

Unveiling the memorial, Deputy PM Grant Robertson told the audience that the Holocaust was the worst example in our times of discrimination and hatred. “Yet we see examples of that around us every single day. So every single day it’s our job to call that out, to say it’s unacceptable. We have to stand up for the values that Anne Frank wrote about – a world of hope, courage, respect and inclusion.”

Netherlands ambassador Mira Woldberg spoke of the importance of having such a memorial, not to forget. “Anne Frank gave us a message of hope and action that we must teach our children – to speak out, not remain bystanders.”

Two young children of Netherlands Embassy staff members read a poem, in Dutch and English, about the chestnut tree that Anne Frank saw through her attic hideout window.

The man who developed the memorial project, 94-year-old Dutch New Zealander Boudewijn (Boyd) Klap, explained how 15 kōwhai trees were planted at the quarry-park two years ago, representing her age when she died in Bergen-Belsen death camp, plus another 75 trees, on the day that would have been her 90th birthday.

When the trees mature and flower, the new memorial will be circled by glorious colour.

In honour of Mr Klap’s dedication to bringing the memorial into being, as well as two Anne Frank touring exhibitions, and the publication of her diary translated into te reo Māori, the Holocaust Centre of New Zealand presented him with a JNF Holland certificate for trees planted in his name in the Anne Frank Forest in Israel, and a special JNF Holland chestnut sculpture.

Holocaust Centre chairperson Deborah Hart said that the memorial fulfilled the organisation’s aims – to witness and remember the Holocaust, educate, and inspire action against hatred, prejudice and antisemitism.
The ceremony closed with beautiful singing of a Māori song by the choir of Wellington East Girls’ College, which adjoins the quarry-park. The school’s principal, Gael Ashworth, spoke of the power of Anne Frank’s message for present-day school pupils, and said the college will have a neighbourly relationship of care with the memorial.

By David Zwartz ONZM
​New Zealand's first Anne Frank memorial unveiled in Wellington
Located in Ellice Park in Mt Victoria, the memorial is the first of its kind in New Zealand, commemorating Anne Frank and the 1.5 million children who were killed during the Holocaust.
READ STUFF ARTICLE by Sophie Cornish. Stuff.co.nz. 14 June 2021 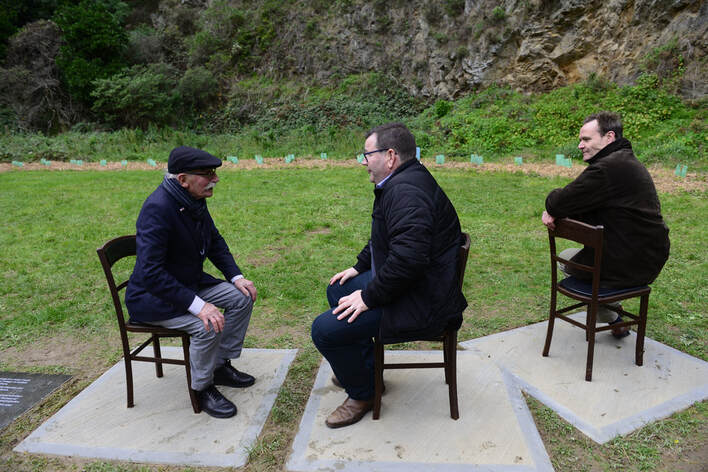 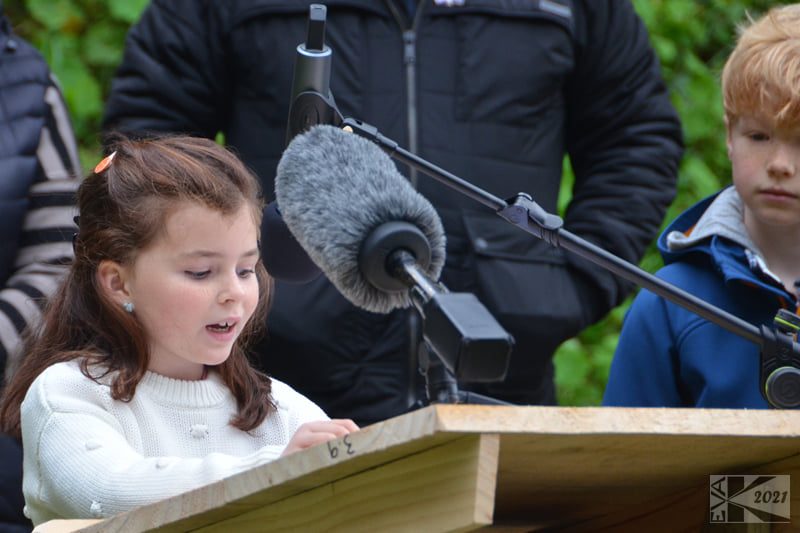 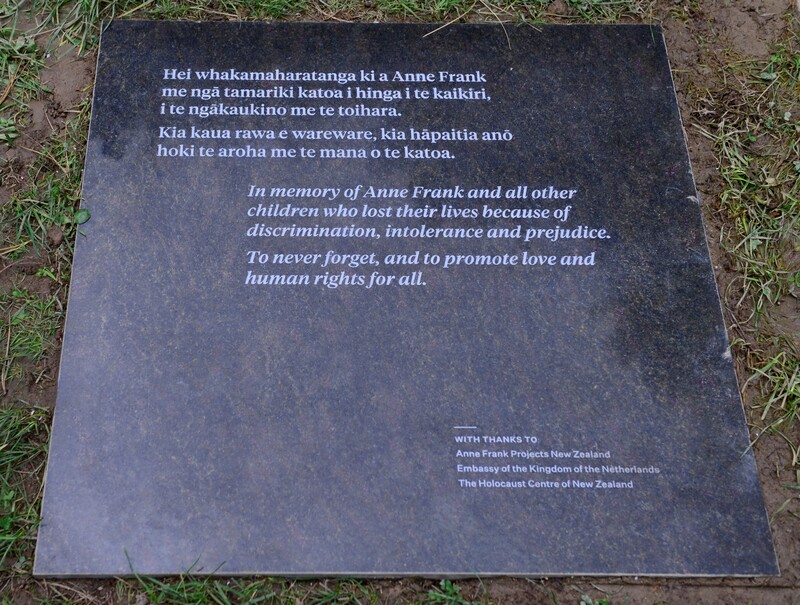 Volunteers are the lifeblood of the Holocaust Centre of New Zealand. On the eve of the launch of the Anne Frank Memorial in Wellington, the DomPost pays tribute to one of our wonderful volunteers, Boyd Klap and the astounding work he has done to fight antisemitism and discrimination. HCNZ is honoured to be associated with him.
Man on a mission against discrimination
Bess Mason. Stuff.co.nz .12 June 2021 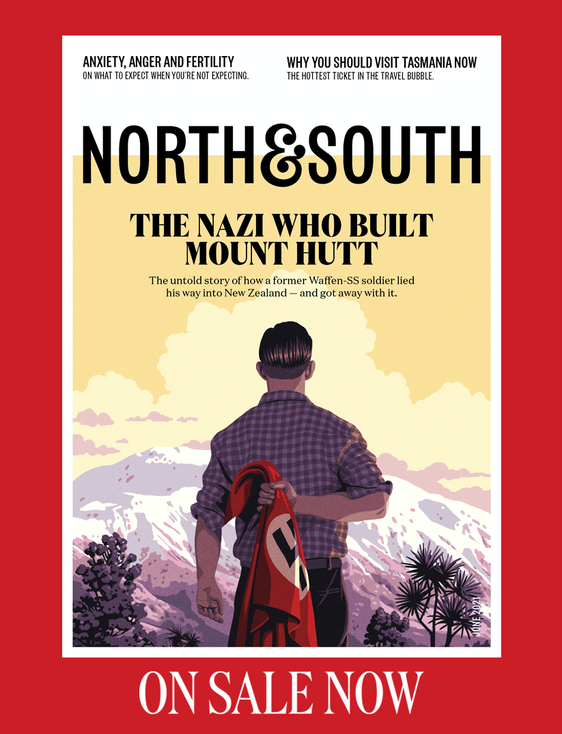 Meaningful Holocaust Work Sees Film From PhD Study [Victoria University of Wellington press release 28 April 2021
Lucy Liu and her supervisor have made a documentary telling the story of composer Boris Pigovat, his Holocaust Requiem, and the massacre that spurred it. 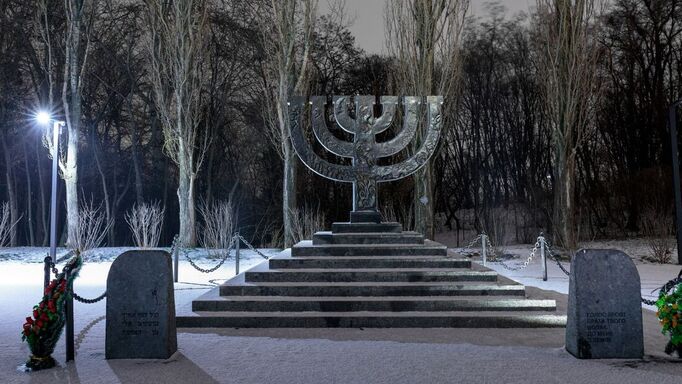 A memorial on the site of the 1941 Babi Yar massacre in Ukraine.
​When violist Xi (Lucy) Liu came to Te Herenga Waka—Victoria University of Wellington as a PhD candidate after studying music in China and Russia, she didn’t expect to end up co-producing a film based on ‘Requiem – the Holocaust’ by composer Boris Pigovat.

Lacrimosa Dies Illa, which she produced alongside her supervisor Emeritus Professor Donald Maurice, tells Pigovat’s story while exploring the music of the Holocaust Requiem in relation to the event that spurred it, the 1941 Babi Yar massacre in Ukraine. The film will premiere at the Penthouse Cinema in Wellington on Thursday 6 May at an event co-hosted by the Holocaust Centre of New Zealand.
Mountain steps out from Nazi shadow, mostly​
​David Williams reports
After months of pressure, a ski run and restaurant at Canterbury’s Mt Hutt are being renamed.
A ski field has quietly wiped a Nazi officer’s name from its slopes – but not from the entire mountain. 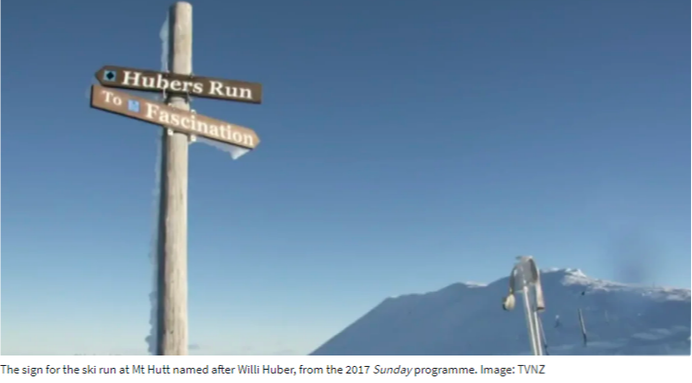 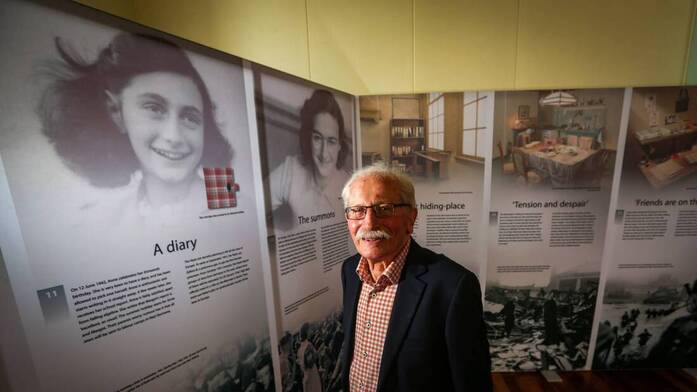 Inge Woolf QSO z"l
It is with great sadness that we, at the Holocaust Centre of New Zealand (HCNZ), inform you of the passing of our Founding Director, Inge Woolf z"l.
Her memory is a blessing unto us all. 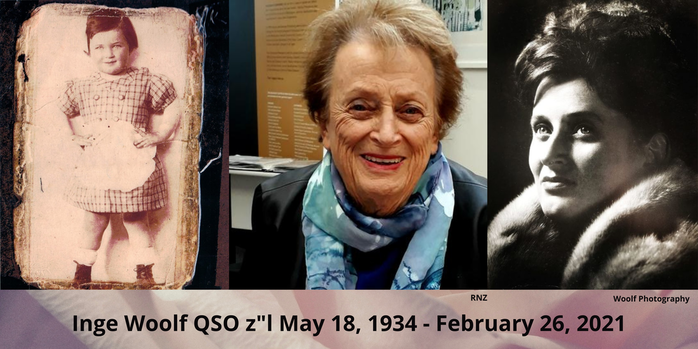 Read Announcement
Inge Woolf: a life dedicated to tolerance and diversity
May 18, 1934 - February 26, 2021
"One of the last things she did before her death was approving the cover of a book to be published later this year on her life. Fittingly, it is called Resilience."
​
Nicholas Boyack Mar 06 2021 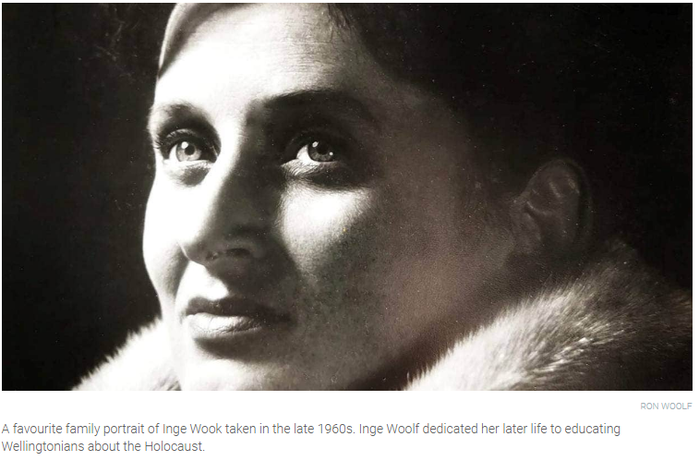 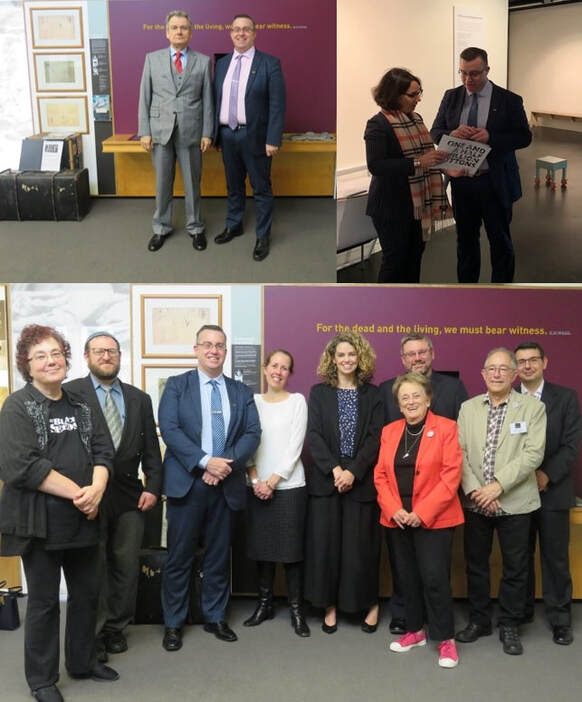 We are grateful to you all for taking time out of your busy schedules to see our work and to discuss the importance of Holocaust education and remembrance.
© 2018 All rights reserved Holocaust Centre of New Zealand | Website by WebXperts Ltd