The Nazis and their collaborators killed as many as 1.5 million Jewish children during the Holocaust. The memorial is designed to remember these children as well as the unaccounted thousands of murdered Romani children, children with physical and mental disabilities living in institutions, Polish children and children residing in the occupied Soviet Union.
These children were sons and daughters, cousins, nephews and nieces, they had parents, grandparents, friends and bright futures ahead of them…but these futures were stolen from them.

When Principal Justine Hitchcock, of Wellington’s Moriah Jewish Day School, was teaching her young pupils about the Holocaust, in 2008, she decided to help the children understand the enormity of 1.5 million children being murdered by initiating a project whereby they would collect 1.5 million buttons - one button for each child that perished. The children themselves managed the project, no child was more than 12 years old.
Buttons were collected, cleaned and counted by the children of Moriah School over a two-year period - each button representing a child that perished during the Holocaust. When understood as a whole, the project conveys a powerful, poignant and disturbing message: one of loss that is simply unfathomable.
By reaching into the past to embrace those who were lost, the children wanted to ensure the persistence of memory. “We wanted to make sure they were not forgotten,” Liza, a 13-year-old Moriah pupil explained during an interview with the education department, in 2012.
Throughout the project the students were engaged in ongoing educational opportunities.  Nearly every area of the New Zealand Curriculum was involved, with Holocaust education being integrated into Social Sciences, English, Mathematics, Sciences, Technology and The Arts.

​Within the two and a half years it took to collect the buttons, the students’ role changed from learners to teachers, as they began to host and present to other schools, across the country, who were inspired by their project.

Their dedication to the project soon garnered support and interest from multiple sectors of the community.  Along with numerous print media stories, the project featured as a news item on Television New Zealand in 2008 and 2010, and the children were interviewed on Radio New Zealand’s Nine to Noon programme in 2009.  One of the highlights of the national attention given to the project was a visit by Prime Minister John Key in August 2009.

More poignant and significant was the attention the school project received both nationally and internationally by family members of Holocaust victims wishing to support and contribute to the button collection.  The students began to receive weekly packages of buttons, often accompanied by the stories of Holocaust victims and survivors, letters of support and photographs.

The project evolved into a story of collective remembrance.
Ex-Moriah school pupil, Benya Klaupaukh, recalls his time as a founding student of the 'Moriah button project':

“My primary school was very small, with only 20 pupils. At my school we were learning about the Holocaust and one fact we came across was that 1.5 million Jewish children were murdered. Our principal wanted to make me and my fellow students understand the magnitude of this number, so we began our project, New Zealand Children’s Holocaust Memorial, collecting 1.5 million buttons, one for each child that perished in the Holocaust.  So, 20 children, no older than 12 years old were supposed to collect and count 1.5 million buttons. This even to me, looking back sounds completely ridiculous, that’s 50,000 buttons per student. However crazy we thought this idea was, we never gave up, we never stopped making posters, we never stopped telling people about our ‘ambitious’ project, and we never stopped counting the buttons that were pouring in. “
​A Memorial & the Project Supporters

In 2010 the collection was completed with the counting of the 1,500,000th button.  By this stage the students had already planned the next phase of their project, which was to ensure the collection was used as both a memorial and a catalyst for education.
Designs for a  memorial were proposed and the project moved into a phase of fundraising.  This stage of the project was championed by two significant patrons: British humanitarian Sir Nicholas Winton (who saved the lives of 669 mostly Jewish children by organising their evacuation in trains from Czechoslovakia to the United Kingdom during the summer of 1939) and acclaimed New Zealand author Dame Joy Cowley.   Both Sir Nicholas and Dame Joy donated buttons to the Children's Holocaust Memorial.

The Moriah Button Project featured in a 2012 edition of the New Zealand School Journal, and was used as an illustration for National Standards in Reading (Yr 7).
The memorial design that had been selected from competition entries, entitled ‘Bewilderment’, was a cube-like building housing a maze with walls filled with buttons and a central candle sculpture including a simple plaque quoting Wellington-based Holocaust child survivor, Vera Egermayer MNZM:

“In a time like the Holocaust it is like living in a pitch-black room, but every time someone does something nice for you,
it’s like them coming in the room and lighting a candle. You need to focus on the light”.

This quote inspired the children because it a) gave them a visual image which helped them comprehend the sentiment and b) helped them find a message of hope within the range of negative emotions Holocaust education evoked.

​Unfortunately, this design was not feasible and a site was never secured.
This next stage was short-lived, and in 2012 Moriah College was officially closed due to a shortage of resourcing.
​
​Sir Nicholas Winton passed away in 2015, aged 106,  before the project could be completed, but Dame Joy Cowley continues as project Patron.

Other notable supporters included:
When Moriah School closed in December 2012, the button collection and plans for a Memorial were entrusted to the Holocaust Centre of New Zealand (“HCNZ”) to continue the project, to create a memorial to honour both the intent and dedication of the children who initiated the button collection and the 1.5 million child victims the collection represents.
​
​
The Memorial begins with a single box on wheels containing a single light; the next box, containing a single button denoting a single child/a single life. As the boxes on wheels grow in size, each unit contains more buttons - representing a family, a class, a school, a city – and each growing in height of container and number of buttons. The tallest unit containing buttons deliberately towers over viewers, enabling them to reflect on the scale of the Holocaust and the 1.5 million innocent murdered children.

There is nearly one metric tonne of buttons with a volume of 1.26 cubic metres laid within the tables which are mounted on plastic wheels wedged to welded steel legs. The industrial metal of the cabinets reflects the Nazi bureaucratic machine and the Holocaust’s industrialised death camps; the red wheels echo a child’s toy wagon.
The Children’s Holocaust Memorial was officially launched at the National Library of New Zealand
​ in Wellington on 15 November, 2018.
'Buttons in memorial art installation a poignant symbol of children lost in the Holocaust'
New Zealand Herald, By Emme Mckay, 16 Nov, 2018 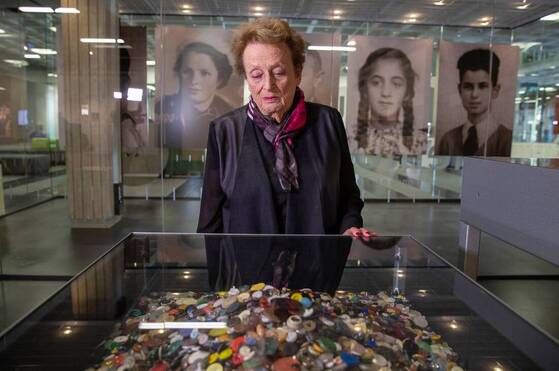 Inge Woolf views some of the 1.5 million buttons representing the number of Jewish children who lost their lives in the Holocaust.
​Photo / Mark Mitchell
NZ HERALD ARTICLE
For details on the education resources and locations of the memorial please go to this page.
Supporting the Children's Holocaust Memorial