Opening Hours
The Holocaust Centre of New Zealand (“HCNZ”) is open to the public Sunday to Friday 10am – 1pm,  10 am - 4pm on the last Sunday of each month, and outside of these hours by prior arrangement.  We are closed to the public when school sessions are taking place, and on Saturdays and some public and Jewish Holidays. (Closed Dates)

Admission
General Entry is free - however we appreciate any and all donations.  HCNZ is a registered charitable entity and donations over $5 are tax-deductible.

Our core exhibition focuses on the Holocaust and the uniquely New Zealand connection, specifically: 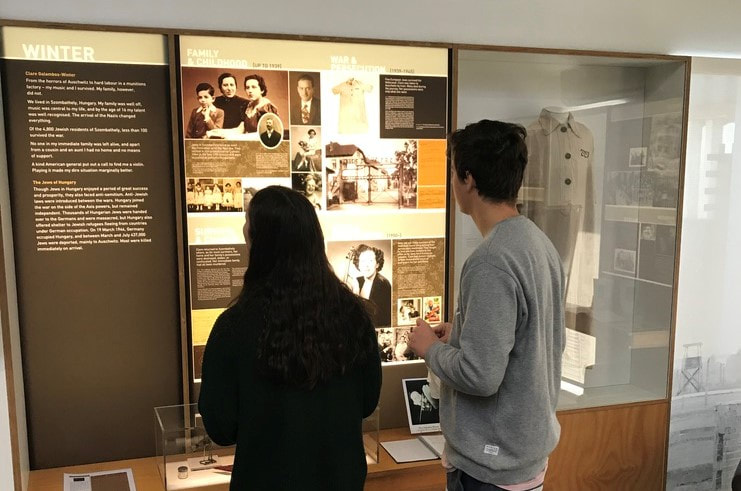 During the year, we often stage temporary exhibitions; for example:

'Auschwitz to Aotearoa: Survival in Nazi Concentration Camps'
This exhibition is about nine Jewish women from different countries and backgrounds, who have in common their survival of Auschwitz and later settling in New Zealand.
(By Dr Simone Gigliotti & Anna Chapman)

‘Anguish of Liberation -  As Reflected in Art’
This exhibition featured 11 artworks (and the personal stories behind each) created immediately after the liberation and up to 1947. The exhibition looks at how survivors reacted to the liberation through art. (By Yad Vashem)

'SPOTS OF LIGHT: To be a Woman in the Holocaust'
This exhibition gives expression to the unique voice of Jewish women in the Holocaust: their choices and responses in the face of the evil, brutality and relentless hardship that they were forced to grapple with. (By Yad Vashem)
Group and School Booking Forms
School Booking Form
Group Booking Form
Did You Know the Holocaust Centre of New Zealand Features on the Commonwealth-Walkway?
Commonwealth-walkway Brochure
© 2018 All rights reserved Holocaust Centre of New Zealand | Website by WebXperts Ltd