Archive
​
We hope you enjoy looking back at past events that HCNZ has held over the years, and we look forward to you attending our events in the future.

Cultural Mediation and Cultural Creativity in Contemporary German-Hebrew Poetry.
​Dr Monica Tempian, October ​2021 https://tinyurl.com/25ydhu38
Lessons learnt from history motivated survivor-writer Manfred Winkler (1922, Putila, Bucovina – 2014, Jerusalem, Israel) to embrace the role of the Jew as a mediator between cultures. Eight volumes of poetry in German, four volumes in Hebrew, as well as poetry translations in seven languages, account for his tireless promotion of a pluricultural ethos. In the midst of our current preoccupation with conflict, memory and memorialization, it seems fitting to engage with an award-winning Israeli writer whose dialogical poetry evokes the memory of the Shoah with a sense of grief rather than from a position of judgement.​
Recorded zoom session below.
​Expressing the Echo: Translating the poetry of Holocaust survivor Manfred Winkler
Courtney McDonald, May 25th 2022.
Holocaust survivors like Israeli poet Manfred Winkler (1922-2014) were faced with the dilemma of needing to remember, and needing to start a new life. Winkler’s poetry transfigured this difficult position and reveals how memory changes, suspends, and renews. A translator has the task of expressing this to a new audience, with different understandings and different expectations. This talk discussed where memory and translation meet by exploring selected poems by Manfred Winkler in contemporary English translation.
AGM 2021

​The Holocaust Centre of New Zealand’s AGM 2021 was held online via Zoom on Sunday September 12th, and we ended up with one of the larger turn outs we've had for an AGM.
Thank you to all who came online to join in. Your presence and participation was warmly welcomed. We appreciate your interest in our activities and support for the Centre. Special thanks to donors, members, Holocaust survivors and descendants, volunteers, and staff.

Chair Deb Hart facilitated the AGM. Business included adopting the minutes of 2020, the annual report of 2021, and the financial report, as reviewed by Treasurer Jeremy Smith. After this, we thanked and farewelled both a board member and our CEO.  ​Board member Giacomo Lichtner has given 5+ years of service to the Holocaust Centre and, fortunately for us, while he steps down from the board he will continue in an advisory capacity. We thanked him for his many contributions, and we look forward to calling on him in the future. Giacomo was ‘virtually’ presented with a gift. Giacomo was also our guest speaker and the meeting was followed by his educational, thought-provoking presentation on Holocaust memory and commemoration.

CEO, Chris Harris, was farewelled with speeches from Chair Deb Hart, Deputy Chair Miriam Bookman, and Treasurer Jeremy Smith. They thanked him for his passion and his countless hours of work over the years, bringing Holocaust education and awareness to the students and people of Aotearoa New Zealand.  A special photo book was shared on screen.

This year we conferred four Honorary Life Memberships upon some incredibly worthy and humble people: Claire Bruell, Carol Calkoen, Robert (Bob) Narev, and David Zwartz. Citations can be read on the MEMBERSHIP page.

AGM 2020
Our AGM on Sunday 6 September was a very special event. We thank all who attended, in-person & via Zoom - especially those who took the time to come on Father's Day.
Board Members stepping down this year include Justin Thompson, Marlene Levine and Penelope Thompson:
Marlene Levine has given long service to the Board, and we have always been grateful for her input, and the fact that she will continue as a volunteer. Having been a Board Member since 2017, Justin Thompson has also resigned but will continue to assist with education. Penelope Thompson also leaves the Board this year, after reinvigorating our comms and media approaches. Our very grateful thanks to Justin, Marlene and Penny. Board Members staying on the Board are Deb Hart (Chair), Miriam Bookman (Deputy Chair), Jeremy Smith (Treasurer), Giacomo Lichtner and Rivkah Nathan.
New Members joining the Board are Diana Wichtel, Helene Ritchie and Marcus Blomquist. We welcome them and look forward to their contributions to HCNZ. 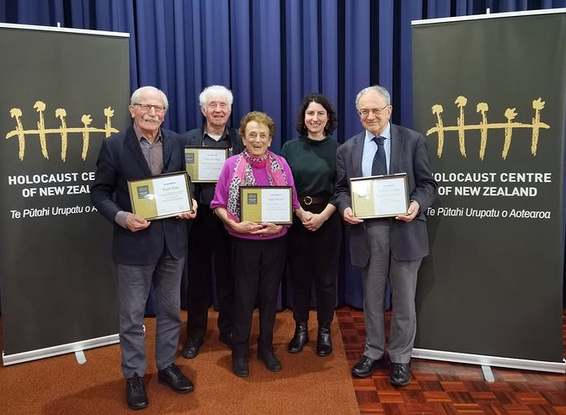 Inaugural Honorary Life Memberships were conferred on Steven Sedley MNZM, Inge Woolf QSO, Boyd Klap CNZM QSO, and Ken Gorbey CNZM.
​HCNZ is indebted to each of these amazing role models, for their dedication and commitment, transforming ideas into realities, and advocating for Holocaust education and remembrance in Aotearoa New Zealand.
​Citations can be read on the Membership page.

The programme featured classical and jazz music, with film scores by leading Jewish European composers who escaped the Holocaust, performed by acclaimed New Zealand musicians.  From resilience to reinvention in Hollywood, these composers wrote music for some of the greatest blockbusters and influenced film music forever.

We thank the internationally renowned and award-winning musicians for giving of their time, talents and passion to bring stunning music to life, in memory of a time of darkness, and the audience and viewers at home for taking time to remember and honour the victims and survivors of the Holocaust. 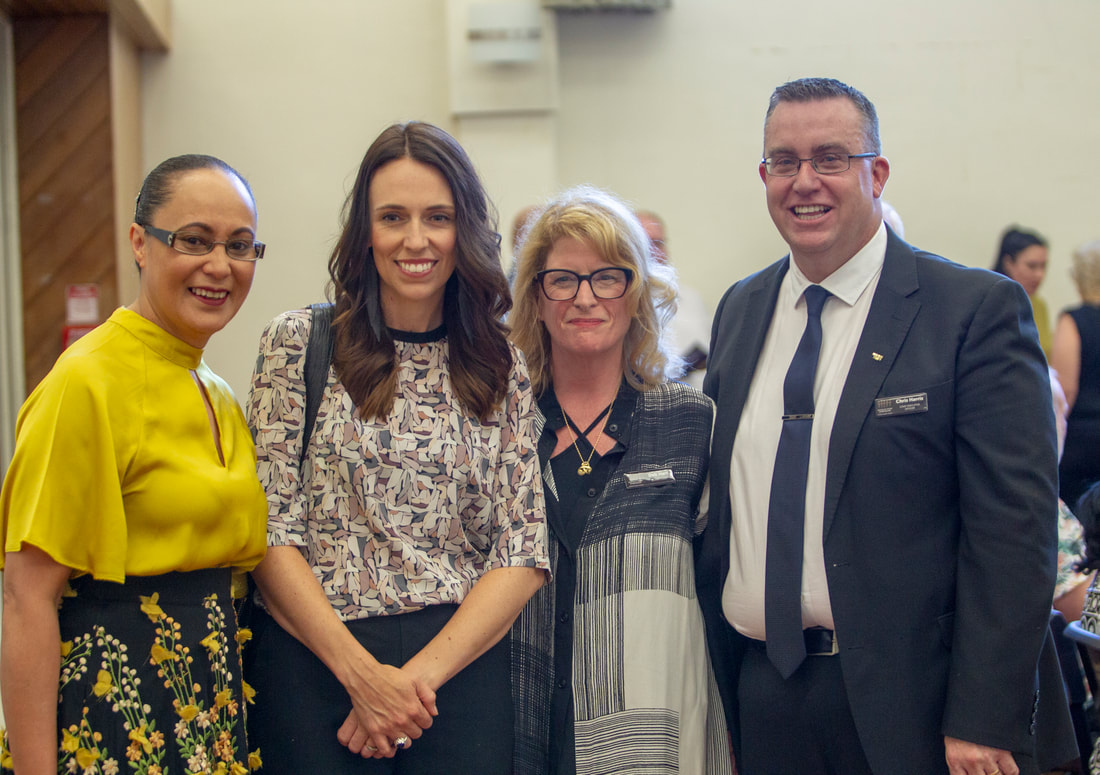 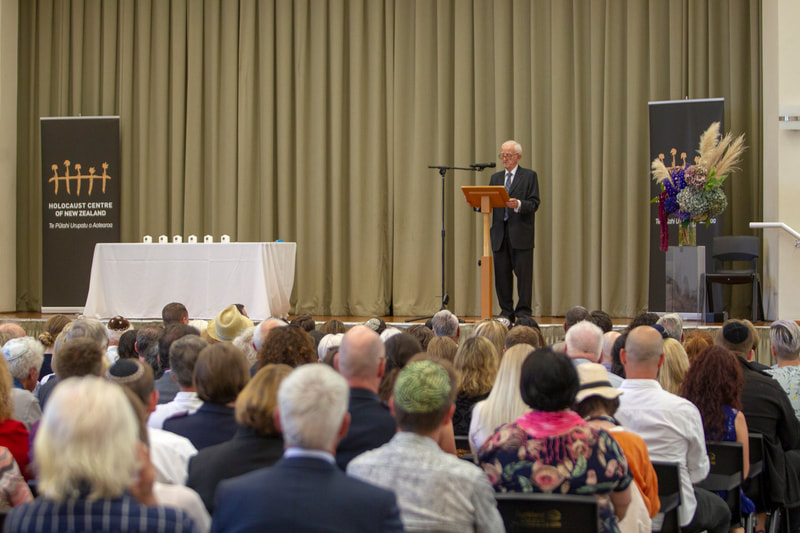 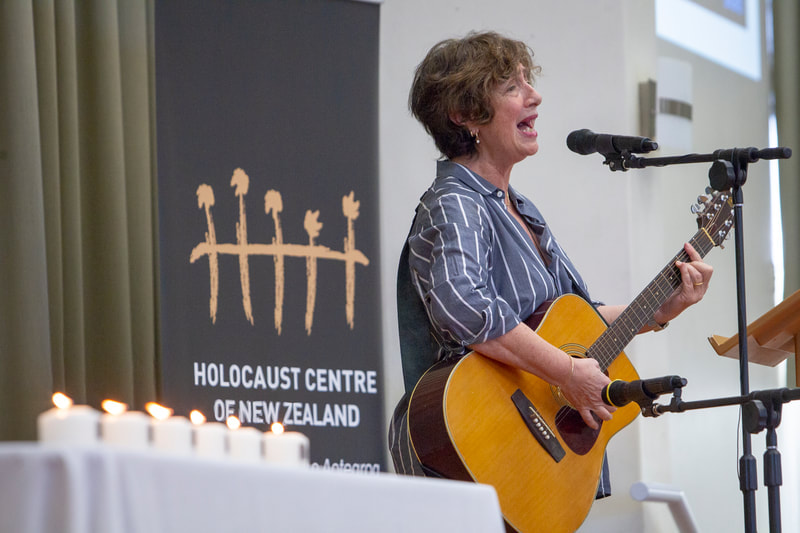 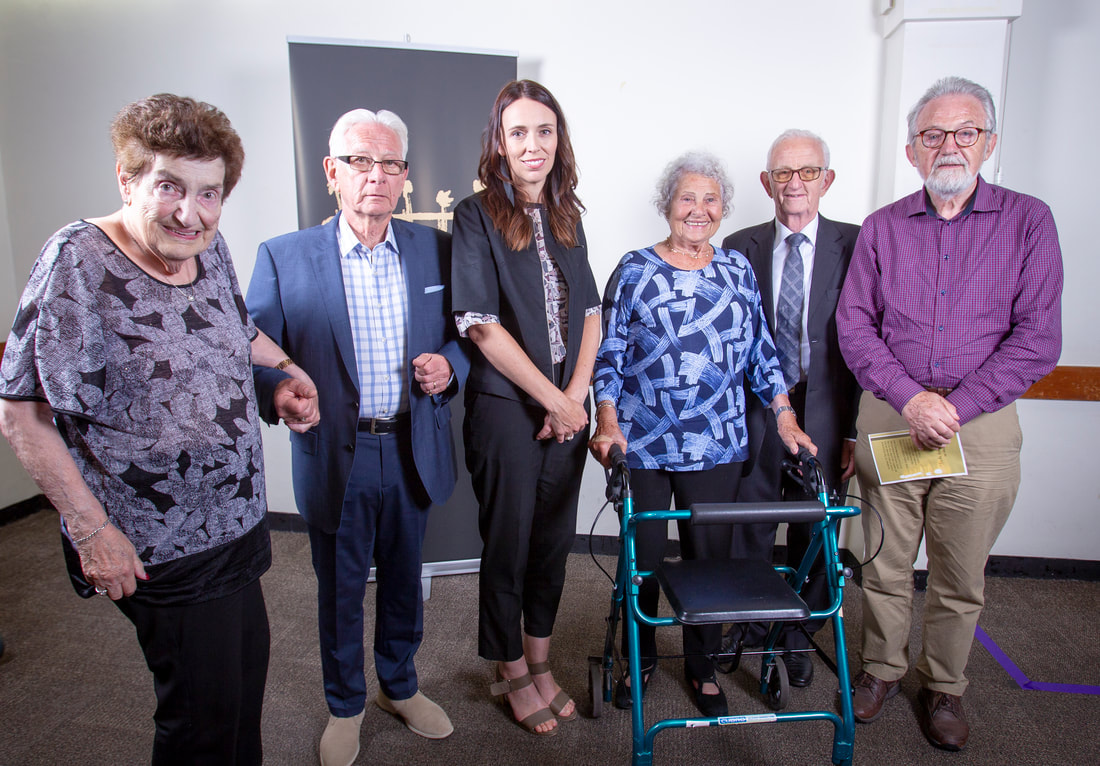 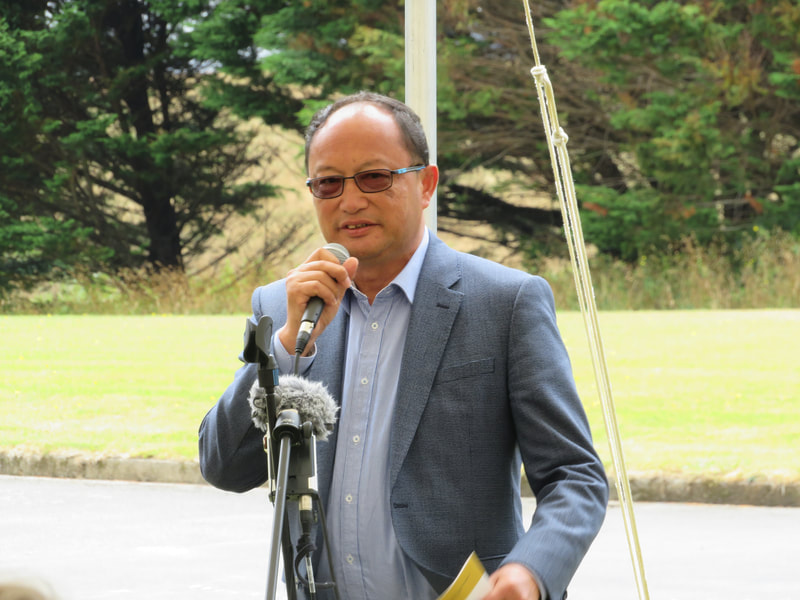 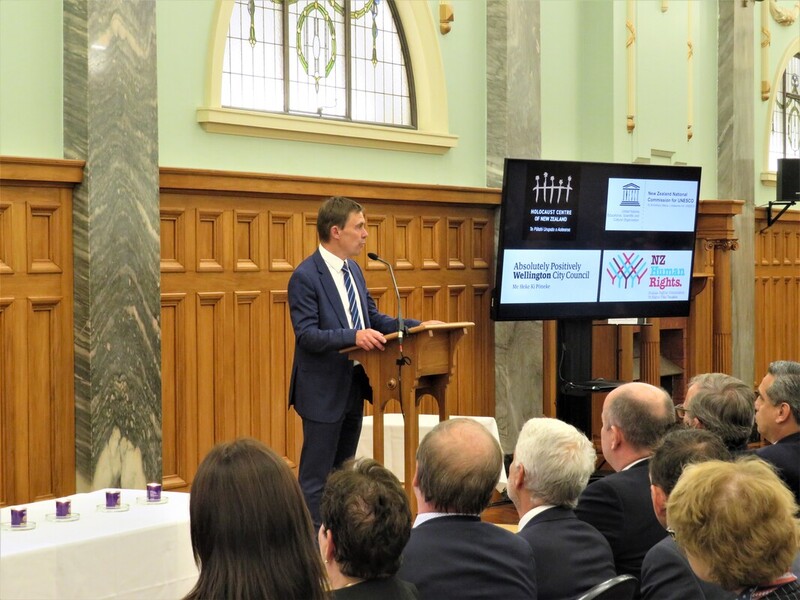 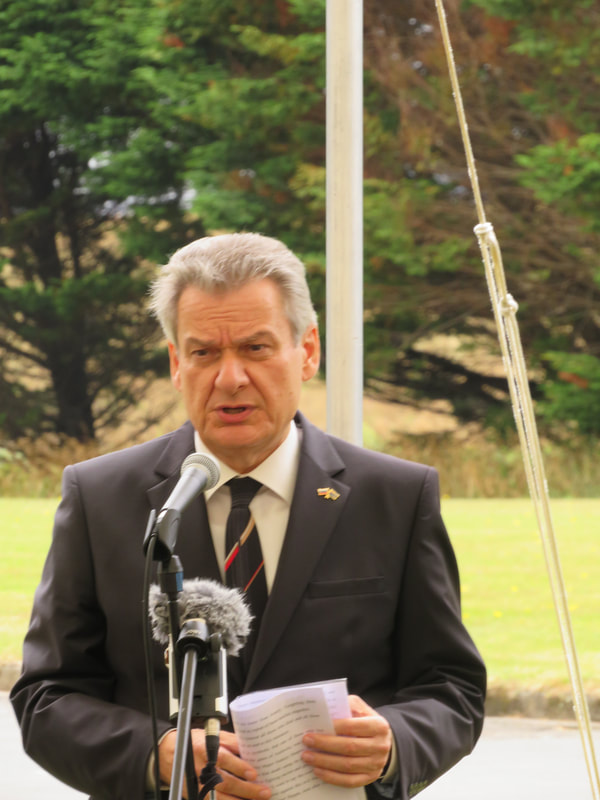 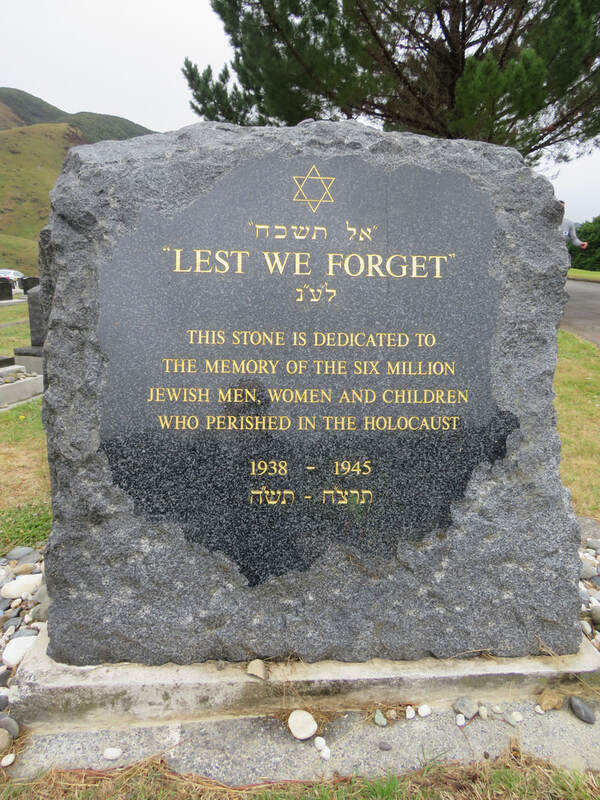 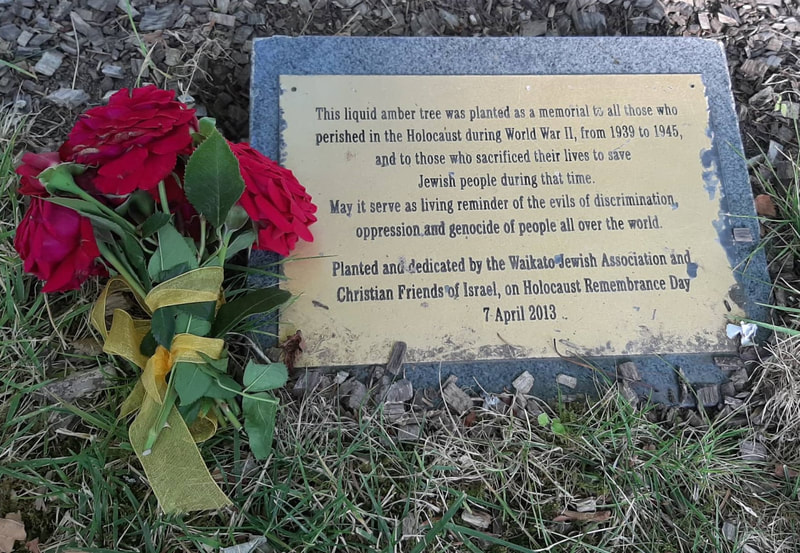 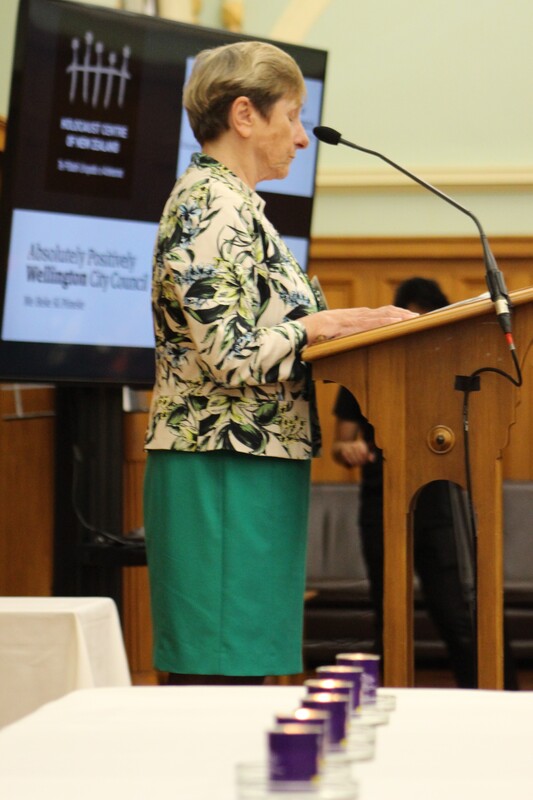 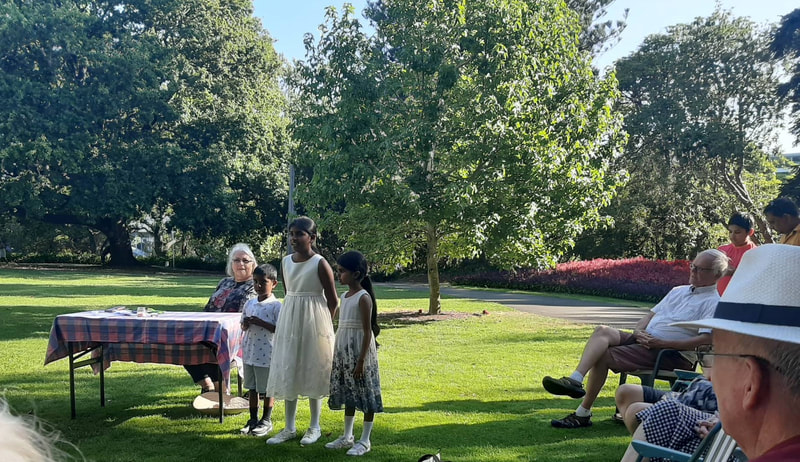 ​​Kristallnacht Unity Concert Nov 10, 2019
​November 10th 2019
Kristallnacht Commemorative Concert - A concert of unity
​
This year’s Kristallnacht commemoration concert on 10 November brought us more of the annual event’s distinctive quality – works associated with the Holocaust performed by leading New Zealand musicians. The concert’s impact was enhanced by taking place in Wellington’s Beth El Synagogue.
Distinguished guests included members of the diplomatic corps among whom were the ambassadors of Germany, Israel, Poland, the Netherlands and Hungary, and Deputy Chief of Mission for Italy and the United States of America.
As well as remembering the violent Nazi pogrom against the German and Austrian Jews on 9-10 November 1938, the concert  – presented jointly by the Holocaust Centre of New Zealand (HCNZ) Te Pūtahi Urupatu o Aotearoa and ​the New Zealand School of Music Te Kōki, Victoria University of Wellington – was also a Unity Concert in memory of the 15 March 2019 massacre at the Christchurch Mosques.
READ MORE
​To quote an audience member: “…..a truly wonderful and moving concert... Almost every piece was new to me and so beautifully played and sung, it was  a memorable and worthy commemoration of such a hideous event in our history.”
CONCERT VIDEO
Yom HaShoah 2019​
Remembering Hungary's Jews on Yom HaShoah
The focus of Wellington’s Yom HaShoah observance on 1 May was the sad fate of Hungarian Jewry 75 years ago, when hundreds of thousands were deported to their death in Auschwitz-Birkenau between May and July 1944.
An audience of about 80, including diplomatic representatives from Israel, Germany, Italy, the Netherlands and USA, Tim McIndoe MP, and interfaith leaders, heard moving accounts from two survivors of the Nazi German aktion against Hungary’s Jews. Steven Sedley MNZM survived in a safe house within the Budapest Ghetto; being passed off as the child of a Christian nanny saved Mary Mowbray-Erdös.

The point was made, that as well as a day for mourning the deaths of six million, Yom HaShoah is also an occasion for remembering the heroism of the Jews who revolted, against all odds, against Nazi oppression – in the 1943 Warsaw Ghetto uprising, and at Treblinka and Sobibor, and even within Auschwitz.
The other face of heroism referred to during the Yom HaShoah service was that of the Righteous among the Nations. Specific examples in Hungary were given – the Papal Nuncio, Monsignor Rotta; the diplomats Carl Lutz (Switzerland) and Carlos Branquinho (Portugal); and Scottish orphanage matron Jane Haining. 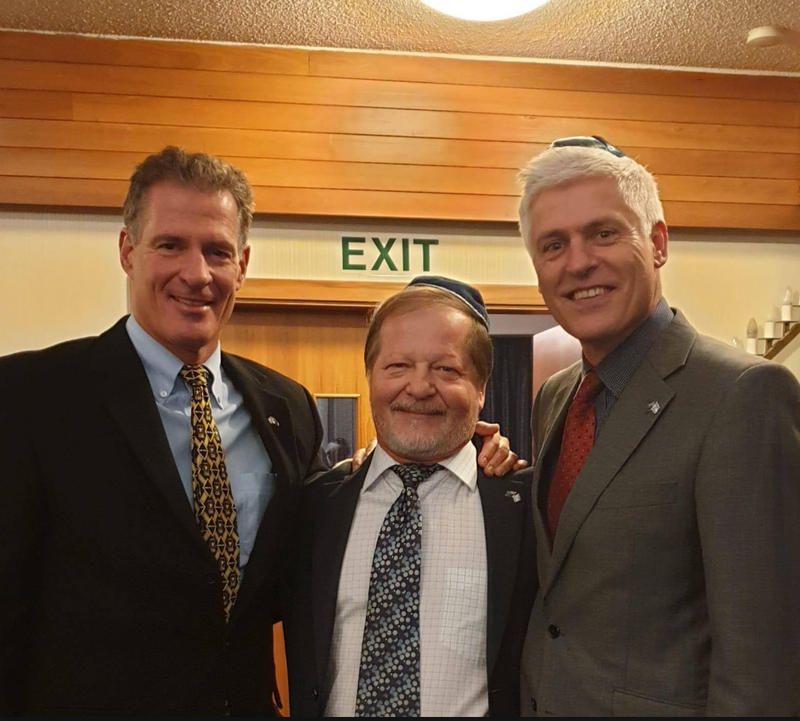 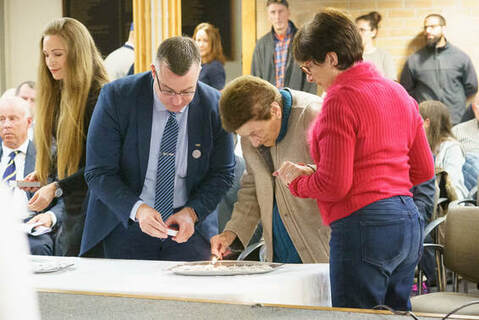