LESSONS OF THE HOLOCAUST 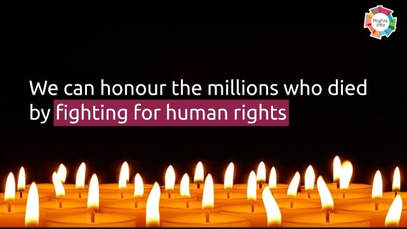 The seminal framework governing human rights, the Universal Declaration of Human Rights (“UDHR), was established in response to the Holocaust; the international community (through the United Nations) vowed to prevent the Holocaust from ever happening again. The Declaration was passed by 48 nations in favour, 0 against and 8 abstentions.

The Holocaust and Human Rights: 10 Lessons (credit: Professor Irwin Cotler)
Lesson 1: The Danger of Forgetting - the Responsibility of Remembrance
The importance of “zachor” (remembrance of the victims of genocide) –  the vital lesson that the mass murder of 6 million Jews and millions of non-Jews is not an abstract statistic. At moments of remembrance, in particular recalling that: “Whoever saves a single life it is as if he or she has saved an entire universe.” We are, in essence, the guarantors of each other’s destiny.
Lesson 2: The Danger of State-Sanctioned Incitement to Hate and Genocide - the Responsibility to Prevent
An enduring lesson is that The Holocaust succeeded not only because of the systematic and industrial-level extermination of European Jewry by the Nazis, but equally, as a result of the state-sanctioned ideology of hate. It is the teaching of contempt, the ‘demonising of the other’ that is indeed the driver and source. As the Canadian Supreme Court affirmed, “The Holocaust did not begin in the gas chambers – it began with words.” It began with genocidal incitement.
Lesson 3: The Danger of Old/New AntiSemitism - the Responsibility to Combat
If The Holocaust is a metaphor for radical evil, antisemitism (one of the oldest forms of race-motivated discrimination) is a metaphor for determined hatred.
Lesson 4: The Danger of Holocaust Denial – the Responsibility to Repudiate False Witness
The Holocaust denial movement-  the cutting edge of antisemitism - is not purely an assault on Jewish memory in its accusation that the Holocaust is a hoax fabricated by the Jews, it is more starkly, an international conspiracy to cover up the very worst crimes in history. Simply put, the intention of the Holocaust denial movement is to bury and whitewash the crimes and atrocities of the Nazis.
Lesson 5: The Danger of Indifference and Inaction in the Face of Mass Atrocity - the Responsibility to Protect
An especially painful and poignant lesson is that the crimes of The Holocaust occurred through a combination of state-sanctioned incitement to hatred and genocide and crimes of indifference - “conspiracies of silence”. What makes The Holocaust - and more recently the Rwandan Genocide - so intolerable is that its full horror was preventable. Indifference and inaction in the face of evil is clearly acquiescence, if not complicity in the very evil itself.
Lesson 6: The Danger of Impunity - The Responsibility to Bring War Criminals to Justice
Few of the perpetrators - excepting the Nuremberg Trials - were actually brought to justice. Impunity emboldens and encourages war criminals and war crimes.
Lesson 7: The Betrayal of the Elites - The Responsibility to Speak Truth to Power
The Holocaust was enabled and advanced by the complicity of the elites, including physicians, church leaders, judges, lawyers, engineers, architects and educators. The Nuremberg crimes were indeed the crimes of the Nuremberg elites. It is our responsibility to ‘speak truth to power’ and to ‘hold power accountable to truth’.
Lesson 8: The Danger of Assault on the Vulnerable and Powerless - the Responsibility to Intervene
It is revealing, as Professor Henry Friedlander noted in “The Origins of Nazi Genocide”, the very first group targeted for killing by the Nazis were the Jewish disabled. As a society, we have a clear responsibility to give ‘voice to the voiceless’ and to ‘empower the powerless’.
Lesson 9: The Danger of the Bystander Community - the Responsibility of Rescue
Remember and recognise the rescuers (the “Righteous Among the Nations”) - of whom Raoul Wallenberg is both  metaphor and message, demonstrating that one person with compassion and the courage to act can confront evil, resist and transform history. The United Nations called Wallenberg the “greatest humanitarian of the 20th century”.
Lesson 10: The Legacy of Holocaust Survivors
We must remember – and honour – the survivors of The Holocaust. They witnessed and endured the very worst of inhumanity, but found the courage to survive and rebuild their lives.

Together with them, we must remember – and pledge – never to be indifferent to racial incitement and hate, to tolerate antisemitism, to ignore the plight of the vulnerable or to be complacent in the face of mass atrocity.
Irwin Cotler is Professor of Law (Emeritus) at McGill University and Founding Chair of the Raoul Wallenberg Centre for Human Rights. He is also a former Minister of Justice and Attorney General of Canada and long-time Member of the Canadian Parliament.
© 2018 All rights reserved Holocaust Centre of New Zealand | Website by WebXperts Ltd