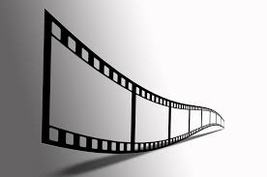 Lacrimosa Dies Illa - Documentary featuring 'Requiem - the Holocaust'
29th September 2021: 80th Anniversary of the Babi Yar massacre
This film is now free access in the public domain and we hope it will be widely shared on the 80th anniversary of the Babi Yar massacre.
In the course of two days, 29-30 September 1941 (Yom Kippur Eve), 33,771 Jewish men, women, and children were murdered at Babi Yar by German Einsatzgruppe C soldiers with the assistance of local collaborators.

Also, to listen to the live recording of the Oct 2001 world premiere of Pigovat's Holocaust Requiem for viola and symphony orchestra please go to
http://pigovat.com/wordpress/babyi_yar_memorial_2001/

Lacrimosa Dies Illa - Film Premiere, featuring 'Requiem - the Holocaust' -  screened May 6th 2021
The Holocaust Centre of NZ was honoured to host last night’s world premiere of Lacrimosa Dies Illa; ‘Requiem - The Holocaust’, a moving experience for all present.
The documentary is based on Ukrainian-born Israeli composer Boris Pigovat’s powerful and emotional Holocaust requiem written to commemorate the massacre at Babi Yar, Kiev, where Nazis and their collaborators executed over 33,000 Jewish men, women, and children, including Pigovat’s family members. 2021 marks the 80th anniversary of this atrocity, which occurred between 29 - 30 September 1941. May their memories be a blessing unto us all and we continue to work towards a more just world.
To hear Upbeat’s interview with Xi (Lucy) Liu and Donald Maurice MNZ (Producer) go to Radio New Zealand.
Thank you to all who attended the evening, and to all involved in making the film. 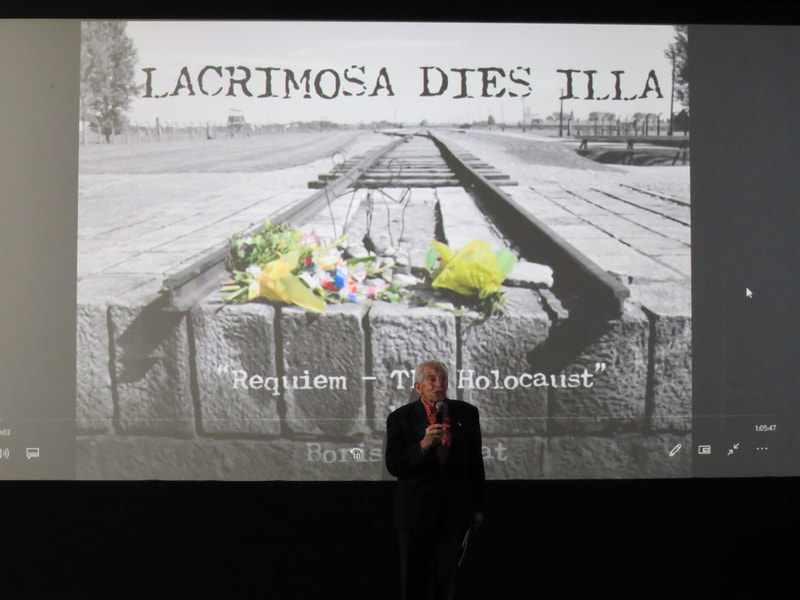 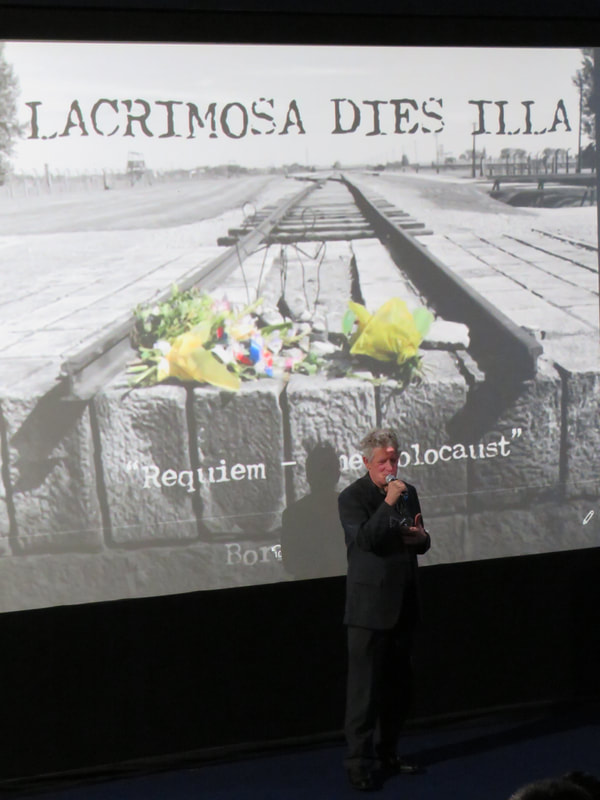 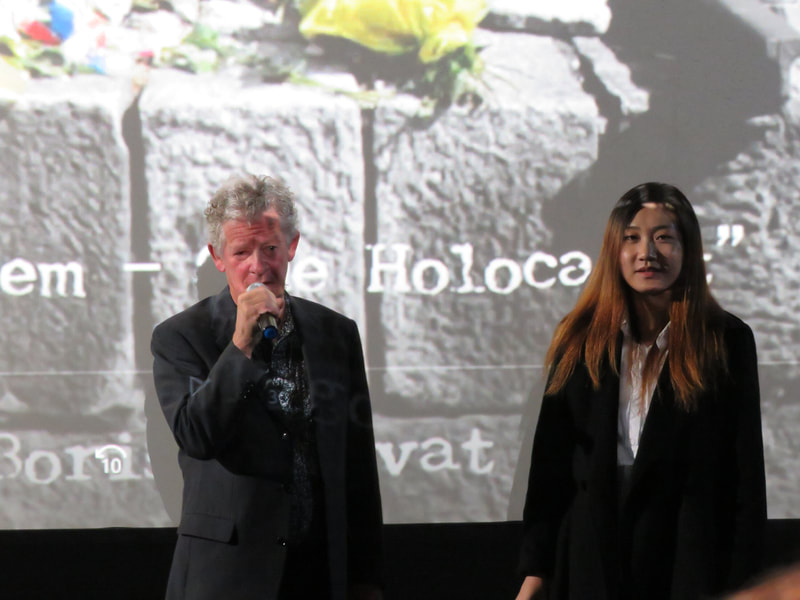 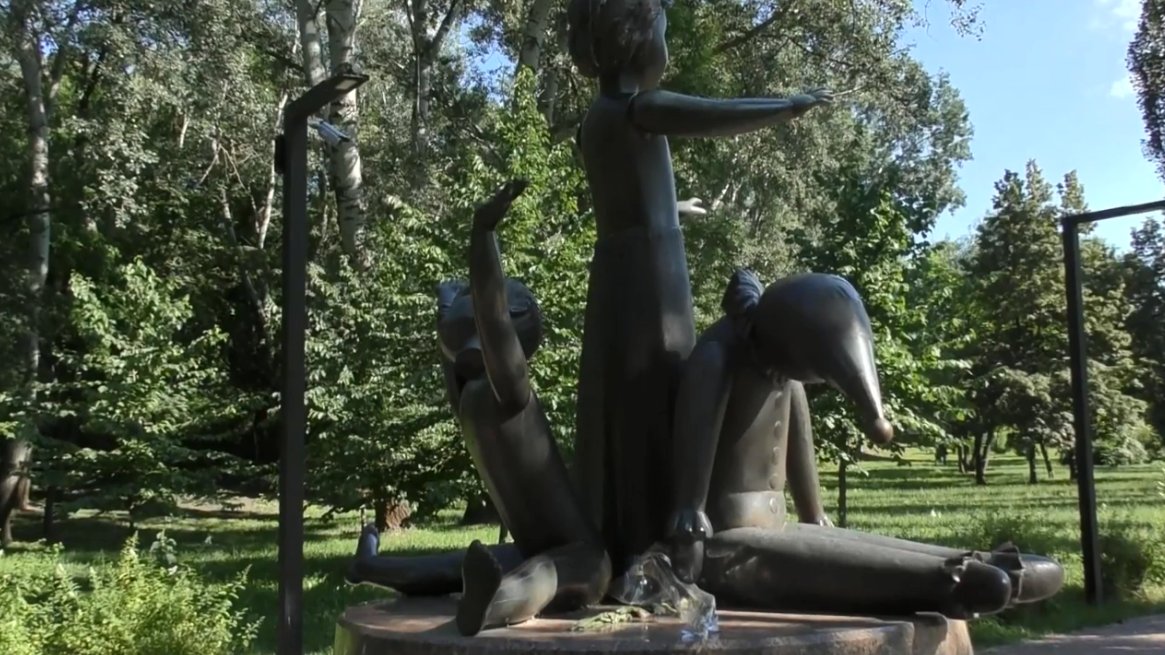 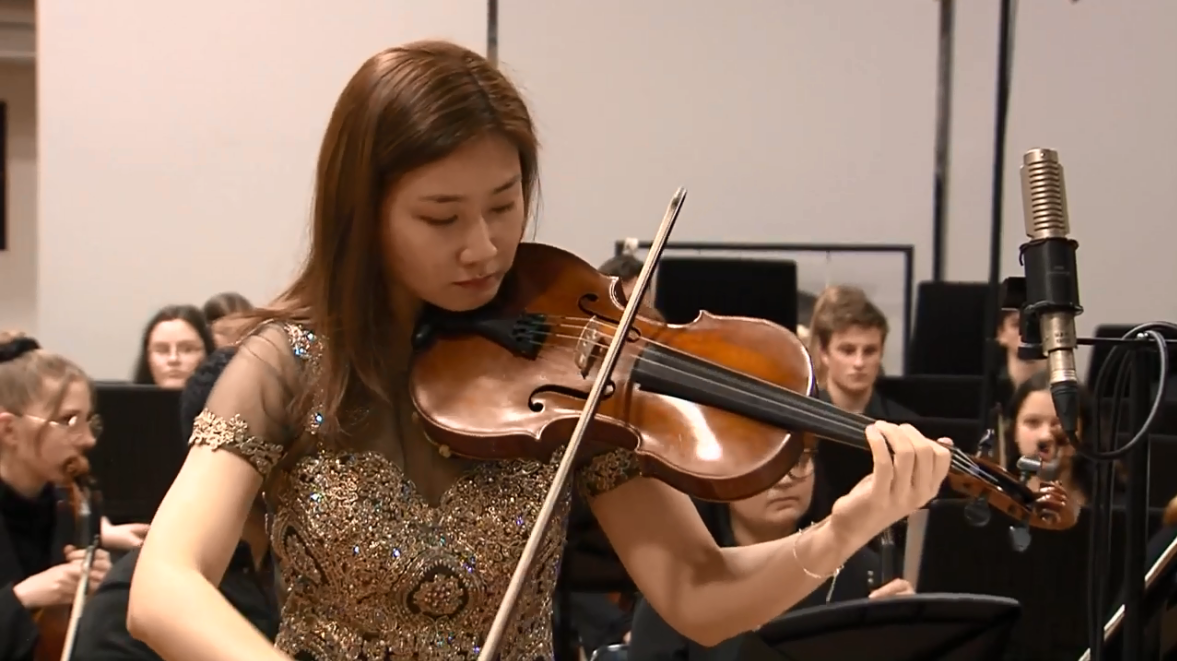 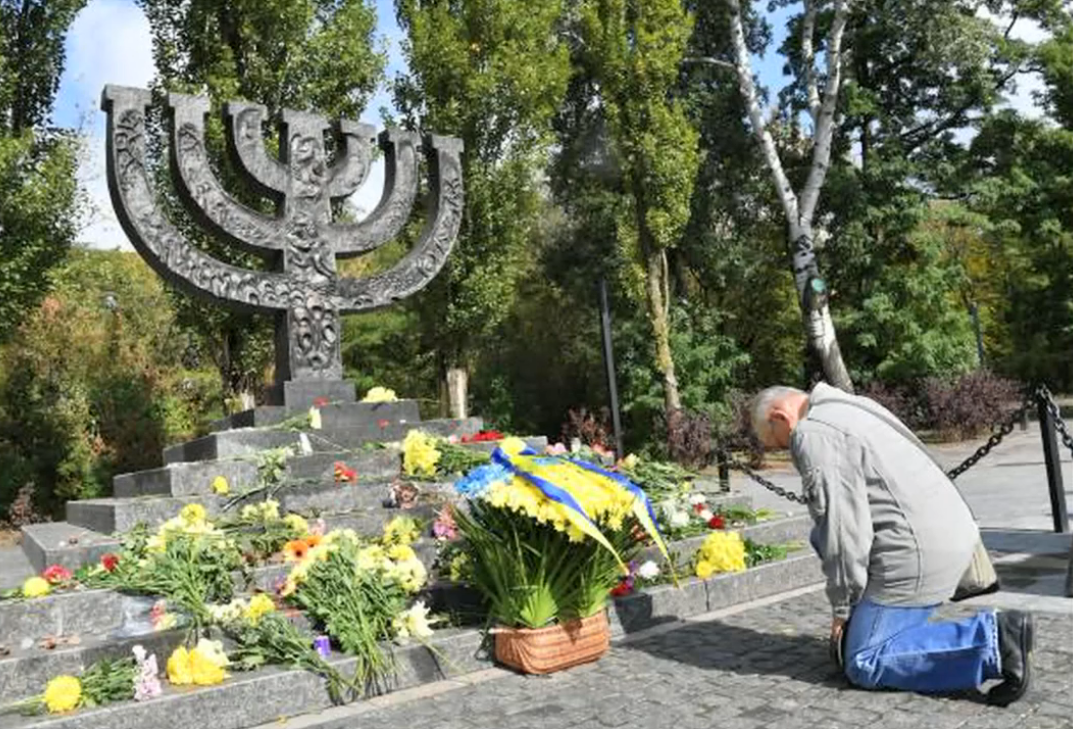 Boris Pigovat's "Requiem – the Holocaust" was first performed in Kiev in 2001 and had its New Zealand premiere in 2008. It only entered into the mainstream of the international musical community after its release on the Atoll Record label in 2011, the same year it had its German premiere at the International Viola Congress in Wuerzberg. Donald Maurice was the solo violist for the CD, Wellington, and German performances.

Narrated by Ukrainian violist Valentyna Bugrak, on location at Babi Yar, the story is interspersed with excerpts from the Requiem, played by the New Zealand School of Music Orchestra, with viola soloist Xi (Lucy) Liu, conducted by Martin Riseley. Boris Pigovat also speaks about each of the four movements, giving insight into the structure and inspiration behind the music.

Both the speakers and the musical excerpts convey the horror of the events at Babi Yar and in the Holocaust in general, harrowing at times but honest and direct, and in the final minutes focus on hope and reconciliation.

This film was shown on Thursday, May 16th 2019 at the ​City Gallery, Civic Square, Wellington 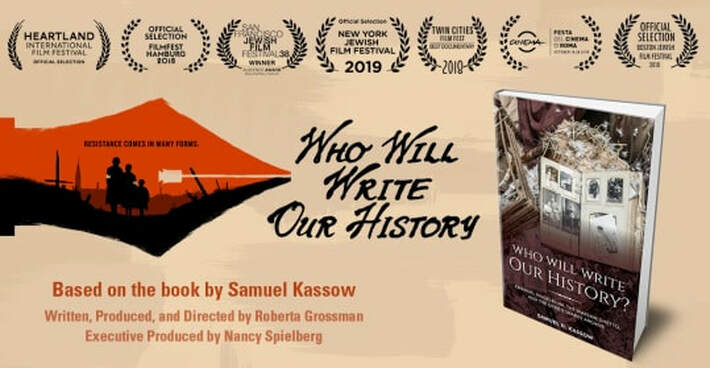 Who Will Write Our History? We Will.
Giacomo Lichtner
​

On 16 May 1943, German forces finally defeated Jewish armed resistance in Warsaw. It had by then lasted four weeks (since erev Pesach, 19 April), and quite long enough to cause Himmler to note in his diaries the fierceness of Jewish resistance. Seventy-six years later, the Holocaust Centre was proud to host at City Gallery Wellington a public screening of Roberta Grossman’s Who Will Write Our History, adding New Zealand to a global map of events marking Yom HaShoah.

This documentary is a remarkable film about Jewish resilience and Jewish suffering, that tells the story of the Warsaw Ghetto’s Ringelblum Archive, also known as Oyneg Shabbes: an invaluable, almost miraculous collection of diaries and documents gathered in the ghetto by historian Emmanuel Ringelblum and his collaborators. Drawing meticulously from the Archive, the film blends archival footage and reconstruction, accompanied by the unvarnished eloquence of the Jews’ own diaries and observations. In so doing, with both skill and empathy, Grossman navigates the danger presented by the historical use of Nazi footage: that is the danger of re-deploying the biases of the eye behind the camera, that captured those images with the intent to humiliate and dehumanise. At its very core, this film is arguably an attempt to subvert that propaganda material by unmasking its lies through the authentic voices of Warsaw’s Jews. Grossman harnesses the Archive’s objective to hear and tell their stories in their own words and remember them on their own terms. We should expect no catharsis, no happy ending from such a film, yet there is a bitter satisfaction in thinking that the Nazis – hellbent on concealing all traces of their crimes – have failed to silence their victims but succeeded in incriminating themselves.

Those crimes are well-known by now, but Who Will Write Our History is only the second documentary (after Yael Hersonski’s masterpiece A Film Unfinished, 2010) to foreground Jewish perspectives on them. Through their diaries we see great hardship, despair and resistance, but also complexities and moral dilemmas that have since become the realm of sometimes controversial historical and political debates. The first of these is the role of the Catholic Polish population. The film is rigorous and balanced in representing a range of attitudes, including profiteering and collaboration but also the heroism of those upstanders who concealed or supported Jews, often at great cost. Grossman’s omission of the city-wide Warsaw uprising of 1944 may prove more controversial, however. There are good structural and narrative reasons not to approach an event that would deserve more than a fleeting treatment, yet moving seamlessly from May 1943 to the arrival of the Soviets will be seen as problematic, especially given the Red Army’s deliberate failure to intervene to support the Polish partisans in their desperate stand. The second sensitive subject emerging from the diaries’ commentary is undoubtedly the ghetto’s Jewish Council and its police force. For contemporary audiences – who are used to analyses cautious in passing judgment on the Jewish Councils – it is heart-rending to hear the Warsaw Jews condemn them in the strongest terms. Where we know that our perspective cannot begin to understand the pressures the Councils and their personnel were under during the Holocaust, the tzaddikim of the Oyneg Shabbes did not see ethical dilemmas, ambiguities or relativism, but only a shocking betrayal. They were exceptional, but the brutality they saw in Warsaw means that the question for us should be not ‘why did more Jews not resist?’ but rather ‘how did anyone find it within them to resist at all?’

There is little doubt that this is a difficult film to watch. It does not refrain from showing in full the horrors of the Holocaust, including rare footage of the Einsatkommando murders. The history of the Holocaust compels us to endure these images, but also to approach them hesitantly, like living people venturing into the realm of the dead. There is remarkable restraint in Grossman’s representation of extreme violence, and it is noteworthy that the filmmaker uses only archival footage to show violence, resisting the temptation to use artifice and performance to heighten or manipulate our response. Subtly, without proclamations, the film identifies starvation as a fundamental characteristic of the ghetto and – in so doing – also finds there a precursor of the Camps. Dehumanisation within the ghetto – by means of starvation, desensitisation to horror, alienation – prepares the ground for Treblinka, Sobibor, Belzec, Auschwitz and foreshadows the ethical questions we associate with these Death Camps. The ability to convey the idea of the ghetto as a site of genocide may well be one of these film’s enduring legacies.

This is a film suffused with a sense of individual and collective loss. The film conveys effectively the Archive’s ability to understand the balance between mass and individual. ‘The life of every Jew during this war is a world unto itself’, is a wonderfully poetic reminder of individuality amid the collective experience of Europe’s Jews. Yet collective loss defines experiences of genocide. Nowhere is this more evident than in the brief description of pre-war Jewish Warsaw – a wide-eyed and melancholic memory of the vibrancy and confidence that preceded the catastrophe. This may be as emotionally unbearable as any of the horrors that follow it: it makes us mourn not only those who died, but also all that they never lived to do and all who never followed them. What would Polish Jewry have accomplished? What might it have meant for Poland, and Europe, and for Jewry? It is a nostalgia for what might have been.
​
Yet even as the Jews of Warsaw were tempted to despair they found their way to defiance, and so should we. Who Will Write Our History is also a film about History and Memory as forms of Resistance. ‘…The Jews began to write…’: the resolution, the effort and the skill necessary to record, to organise, to understand the human experience. This a testament to learning as a value in itself – a civic (secular as well as religious) mitzvah. When outside forces push to alienate us, to force us to turn inward and focus narrowly on survival instincts, any act of intellectual curiosity, of leisure even, is a tangible act of resistance. Culture – of whatever kind – is about human connections, and to cultivate human connections and curiosity is to strengthen fundamental aspects of our humanity. There is some solace and a great deal of relevance in the Oyneg Shabbes’s lesson: something to hold onto as we find our own courage to continue to face the horrors that occurred and renew our eternal vigilance.

​Giacomo Lichtner is Associate Professor of History at Victoria University of Wellington. He is Associate Editor of the journal Modern Italy and serves on the board of the Holocaust Centre of New Zealand. Lichtner is the author of Film and the Shoah in France and Italy (2008, 2015) and Fascism in Italian Cinema Since 1945: the Politics and Aesthetics of Memory (2013). He is currently working on a study of the search for meaning in Holocaust cinema to be published by Bloomsbury.
Click here to learn more about the film
© 2018 All rights reserved Holocaust Centre of New Zealand | Website by WebXperts Ltd