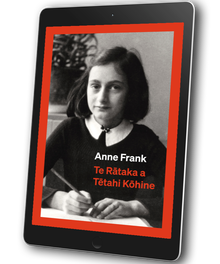 Te Reo translation of a classic provides this vivid, moving story with a Maori voice

The story of Anne Frank, a teenage Jewish girl who had to hide from the Nazis in occupied Holland during the Second World War, is known around the world.

Her diary, translated into more than 70 languages and published in 60 countries, is now joined by this edition in Te Reo Maori, one of New Zealand’s three official languages.

Translator Te Haumihiata Mason, who was herself discriminated against as a young Maori and very much identified with Anne’s life, has turned this edition of the diary into a vivid, moving story with a Maori ‘voice’.

It is our hope that this translation will add to the knowledge of the Shoah-Holocaust, the story of Anne Frank, and the dangers of discrimination, which each of us can influence even at the individual level.